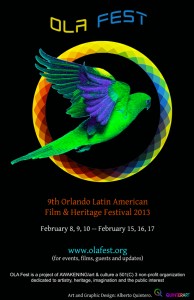 January 27, 2013 – The “Spirit of Place” Award is an award given out by the Orlando Latin American Film & Heritage Festival for for excellence in social realism and activism in the arts. We got the idea for the award from the writings of film critic Sky Hiatt who wrote, “Art needs to reassert its historical purpose. Creative, conscientious minds must be encouraged to analyse problems and dramatize solutions and should be rewarded for it.” His suggestion was that it was about time that we should give film awards for categories like: best anti-war message, most accurate minority casting, best environmental awareness, best use of traditional music, best political message, best feminist message and best cultural awareness.

June 8, 2012 – The Telly Awards has named Cynthia Cohen and Allison Lund as winners in the 33rd Annual Telly Awards for their piece titled “Acting Together on the World Stage.” Read the whole story here…